This paper presents a new gravity inversion method to estimate the depth of the crust-mantle interface (the Moho). The inversion uses a spherical Earth approximation by discretizing the Earth into tesseroids (spherical prisms). The forward modeling method used is described in the Tesseroids paper. We applied the inversion to estimate the Moho depth for South America. 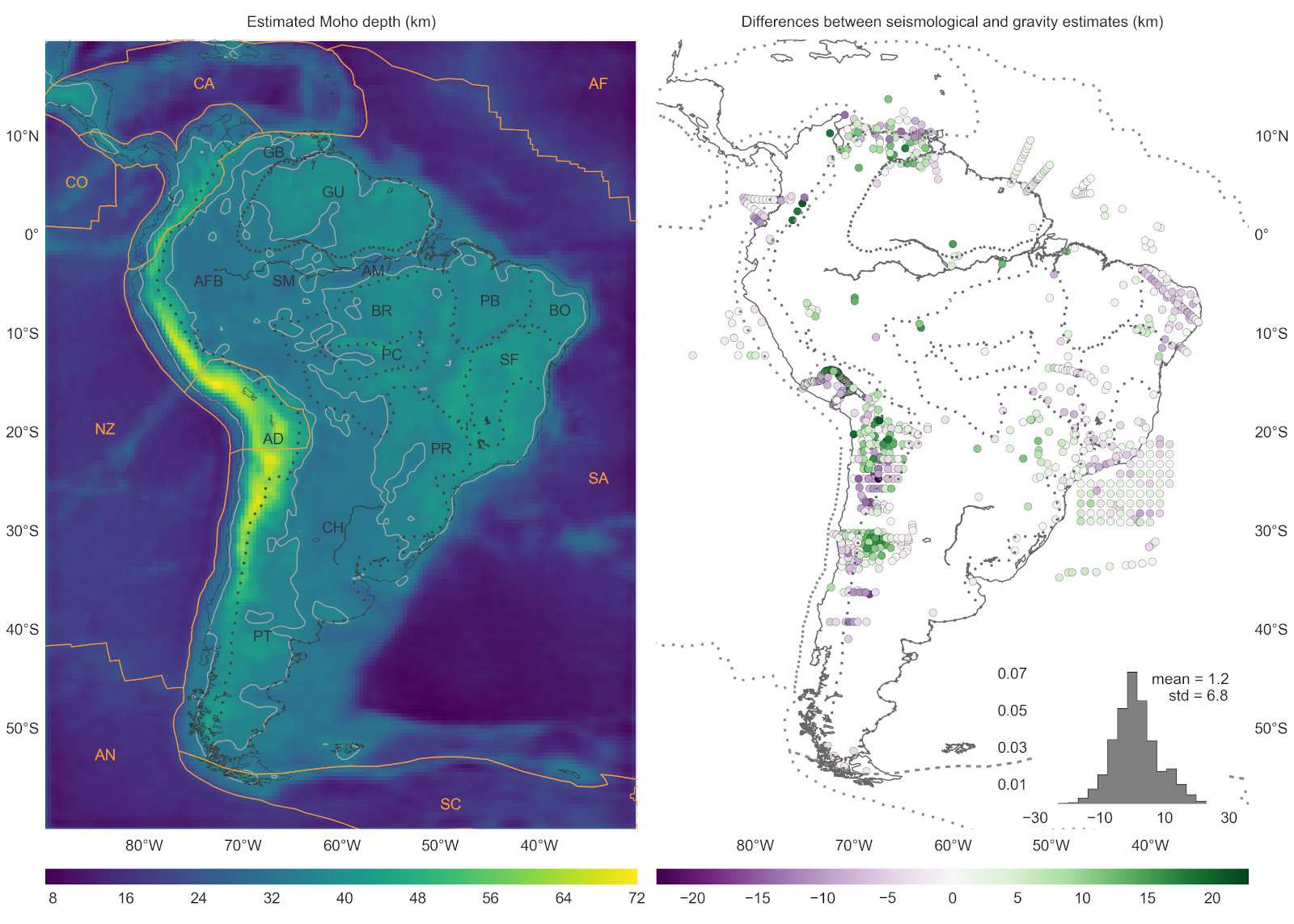 The inversion method proposed here is implemented in the Python programming language. The code uses the forward modeling and inversion packages of the Fatiando a Terra library (version 0.5).

You'll find the source code, input data, and instructions to produce the results from the paper on the Github repository. There should be enough information for you to produce all figures of the paper.

Estimating the relief of the Moho from gravity data is a computationally intensive non-linear inverse problem. What is more, the modeling must take the Earths curvature into account when the study area is of regional scale or greater. We present a regularized non-linear gravity inversion method that has a low computational footprint and employs a spherical Earth approximation. To achieve this, we combine the highly efficient Bott's method with smoothness regularization and a discretization of the anomalous Moho into tesseroids (spherical prisms). The computational efficiency of our method is attained by harnessing the fact that all matrices involved are sparse. The inversion results are controlled by three hyper-parameters: the regularization parameter, the anomalous Moho density-contrast, and the reference Moho depth. We estimate the regularization parameter using the method of hold-out cross-validation. Additionally, we estimate the density-contrast and the reference depth using knowledge of the Moho depth at certain points. We apply the proposed method to estimate the Moho depth for the South American continent using satellite gravity data and seismological data. The final Moho model is in accordance with previous gravity-derived models and seismological data. The misfit to the gravity and seismological data is worse in the Andes and best in oceanic areas, central Brazil and Patagonia, and along the Atlantic coast. Similarly to previous results, the model suggests a thinner crust of 30-35 km under the Andean foreland basins. Discrepancies with the seismological data are greatest in the Guyana Shield, the central Solimões and Amazonas Basins, the Paraná Basin, and the Borborema province. These differences suggest the existence of crustal or mantle density anomalies that were unaccounted for during gravity data processing.